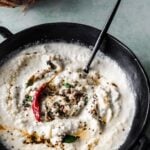 Coconut chutney, or nariyal chutney, is a popular traditional South Indian condiment made from fresh brown coconut and chana dal (split chickpeas). It's savory and spicy after being topped with a flavorful tadka of spices and curry leaves. The chutney is served along with breakfast and brunch items like idli, dosa, and uttapam.

Chutneys were made weekly in my household. Some households even make chutney fresh on a daily basis, because it's served with absolutely everything.

Coconut chutney is especially popular when we have brown coconuts in the house. They're also called puja coconuts, because they're used for Hindu prayers. Breaking the coconut during puja signifies shedding our outer shells, our ego and negative qualities, in front of God to reveal our pure inner layer.

The coconuts never go to waste! They're snacked on, dried for later use, or more commonly used for coconut chutney. My household is from Delhi, in northern India, so it was always special if we got South Indian cuisine. Dosas and idli came from boxed, readymade mixes but we always had fresh coconut chutney made at home.

What is Coconut Chutney?

Chutney encompasses various forms of sauces or condiments in Indian cuisine. They're used as dips, dressings, spread, marinades, or accompaniments to main dishes, sides, and appetizers. Chutneys are made from a wide variety of ingredients, such as tomatoes, herbs, tamarind, coconut, etc. Some of the most popular chutneys are mango chutney and cilantro-mint chutney.

Coconut chutney is a traditional South Indian condiment made from a coconut-based paste with chana dal (split chickpea). It's then blended with chilis and some other flavor enhancers. Lastly, it's topped with a spicy tadka made of mustard seeds, chilis, asafoetida, and curry leaves.

Coconut chutney is a staple in South Indian cuisine due to the abundance of fresh coconuts in the south of India. It's the best accompaniment for dosa, idli, vada, uttapam, etc. You may recognize it as the dosa chutney.

What is a Tadka?

There's a few ways of working with Indian spices: using them raw, dry roast and grind into a powder, or tempering in oil.

A tadka is blooming, or tempering, spices in fat like ghee or oil in a very small pan, called a tadka pan. It's also known as chhonk or phodni in various regions of India, but is commonly known as tadka to most. Adding spices to hot oil or ghee is a popular technique in Indian cooking that extracts flavor.

The tadka can occur at the beginning or end of a dish. You'll frequently see Indian dishes beginning with adding seeds and spices into hot oil first before adding aromatics or vegetables.

Another method is to cook the dish in its most basic form, and then add the tadka on top which is very common for a lot of dals. This is so that the spices are "fresh", in the sense that they are just bloomed and will be quite strong.

In contrast, cooking with the spices in the beginning will allow them to mingle with the dish and create several layers of flavor but flavor of spices and ghee or oil won't be as prominent.

You only need a few teaspoons to a few tablespoons of oil based off of the volume of food you're cooking and the spices you're using. The small tadka pan allows the spices to be completely covered by the oil. The oil used should be at a high smoke point which is why mustard oil, vegetable oil, or ghee are popular picks. It's important to be cognizant of the order of ingredients added into the hot oil to prevent burning.

While coconut chutney is considered pretty basic in Indian cooking, it does require some specialty ingredients that may not be common to many kitchens.

For the tadka, use any fat like mustard oil or ghee to roast the spices. Mustard seeds, dried, red chili, asafoetida, and curry leaves create an aromatic, spicy, garlicky mixture oil that's a delicious addition to the coconut.

How to Open a Fresh Coconut

To open a brown coconut, start by removing the husk. Locate the three holes at the bottom of the coconut. Jam a screwdriver into a hole, and pour out the coconut water into a glass. Save this to drink or add to smoothies, curries, etc.

How to make Coconut Chutney

There's two parts to making coconut chutney - making the coconut-based chutney and then tempering the spices.

Start by roasting the chana dal in neutral oil until it's golden brown. Drain the oil from the dal and transfer it to a blender.

Then, add the serrano peppers, ginger, salt, curry leaves, and lemon juice and continue running the blender. Add water from the top of the blender until the paste starts to run into a smooth thick chutney consistency. It shouldn't be watery at all. It'll still be gritty from the coconut. Transfer the coconut chutney to a bowl or wide-mouth jar.

Add oil to a tadka pan or a very small pot / pan and heat it on low to medium. The coconut chutney doesn't require too much oil since the coconut releases it's own oils. Only use 1 teaspoon to ½ tablespoon depending on how much coconut chutney resulted from the previous step. If you're using a small pot or pan, let the oil pool to one side and only add the spices directly into the oil.

Remove the stem from the red chili and break it in half. Once the oil starts to shimmer, add the mustard seeds and chili. After the mustard seeds start popping, add the curry leaves and asafoetida. Be very careful! The moisture in the curry leaves will cause the oil to start sputtering. Stir the oil with a small spatula or spoon. Lift the tadka pan from the stove as necessary to control the heat.

Continue to roast until the curry leaves get crispy. The oil should be very aromatic. Remove the tadka pan from heat and pour it over the coconut chutney. Give the chutney a stir, and it's ready to serve.

Coconut chutney is a popular condiment for most items in South Indian cuisine. It's appropriate for breakfast, appetizers, and main dishes all the same.

Serve it popular breakfast items like idli, dosa, uttapam, or vada. Or serve it with savory dishes like pakoras or in sandwiches.

Store coconut chutney in the fridge for up to 7-10 days. Alternatively, freeze it in an ice cube tray and transfer them to a freezer bag for up to 3 months. 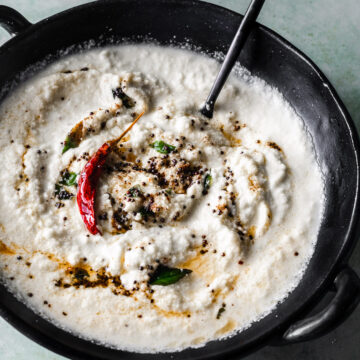