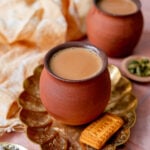 There's nothing as good as the perfect cup of Indian Masala Chai whether it's in the middle of summer or for cozying up in the winter. Black tea is simmered with warming and fragrant spices and is best served with Parle-G biscuits or cake rusk for dipping.

Ahhh, Masala Chai. This recipe is LONG overdue for a website called Masala and Chai. It was so important for me to develop an authentic recipe that's true to my roots.

My source of comfort has always been masala chai. The milky foam with specks of tea leaves is mesmerizing as it bubbles away, filling the air with fragrant spices. Then there's the slight impatience of waiting for the first sip as the familiar clink of spoons sound off as the sugar is mixed into individual cups. Time slows down as one settles in with a cozy cup amongst friends and family.

My addiction to chai started with my dad's obsession - three cups a day to keep him going even in the Arizona heat. I'd watch him come alive in the early mornings as he peacefully enjoyed his first sips, enjoy another cup after a solid afternoon nap, and yet another when that evening headache screamed for more caffeine.

As I got older and visited my parents in Phoenix, they'd randomly bring me a fresh brewed cup as I worked remotely and another in the evening as I settled in to watch TV. It's the best way of showing love!

Masala Chai, or chaa in other regions, is a milk tea simmered with spices. Chai originated in India during British colonization and is now enjoyed throughout the diaspora.

It was heavily popularized in the United States by Teavana's Oprah Chai Tea at Starbucks in 2014 as a way of "elevating the tea experience." The outcome was a cinnamon heavy, watered down attempt at masala chai that was palatable to Americans but detested by desis. And thanks to Starbucks, people also began saying "chai tea". Chai means "tea", so chai tea means tea tea. It's redundant and cringe-worthy.

What followed was a rise in white-owned brands releasing their own "chai tea" blends and bland sugar-heavy masala chai concentrates (I'm looking at you Trader Joe's) with their Eat Pray Love self discovery BS in their about us page. Ma'am, we don't care if you "discovered" chai during your two week trip to India and now want to share it with the world.

Over the past few years, desis in the U.S. have been reclaiming our culture when it comes to chai and "naan bread" * rolls eyes *. There are now so many amazing desi-owned brands selling chai masala, masala chai blends, and chai concentrates that yield perfectly spicy sweet cups of chai when mixed with milk. A few of my favorites are from Madhu Chocolate, Pur Spices, and The Chai Box.

Some of my most impressive memories of chai was in India, of course. I remember one time I was with my tauji (dad's older brother) who was driving us to a mandhir (temple). We stopped in a little shop where I watched the chaiwala pulling the tea from insane height. He would flip it into the air and somehow catch it in a tiny cup. I was absolutely blown away and asked what was happening.

And funnily enough, my favorite cup of tea was with my mom and aunts when they were buying gold. I sat in a corner while they mulled over options for what felt like hoursss. At some point, I was brought a scorching hot cup of chai which was absolutely incredible. I savor that chai and use it as my base for the best cup of masala chai ever.

Chai is a way of life for us and a deep part of our culture. It's a quick cup when visiting someone, or spending time at the jewelers and clothing shop. It's symbol of hospitality while catching up with friends and family. It's stopping on the side of the road during a road trip to grab a cup for ~ energy ~.

What is Masala Chai?

There's a saying that the food in India changes every 100km... but if there's one thing that ties all Indians together - it's chai. And even then, there's different types of chai such as Kashmiri pink chai, adarak (ginger) chai, masala chai, etc.

It's enjoyed in the Indian subcontinent in the mornings, afternoon, and in the early evening for a burst of caffeine or some cozy relaxation. Chai is typically served with Parle-G biscuits or cake rusk. We do a quick dip to soak up the chai and eat it before it falls into the mug.

DID YOU KNOW?
Masala chai originated in the 1900s during the British colonization of India when chaiwallas (street vendors selling chai) began adding spices and milk to tea.

China had a monopoly on the European supply of tea, and the East India Trading Company had a monopoly on Chinese tea in England. Once China restricted the export of tea, the British were desperate to find another source. They discovered tea in Assam that was almost identical to that in China. The British began cultivating tea in 1838 at plantations in Assam using cheap Indian labor.

Due to the lack of knowledge on processing and transport, the tea produced was incredibly low quality, crop yields were low, and export outside of India was difficult. The Indian Tea Association, made up of British tea planters, decided to promote tea drinking to a wider audience to maintain their profits. Indians were given mandatory tea breaks as part of a marketing campaign. Chaiwallahs popped up around India. Inspired by Ayurvedic practices, they began adding milk and spices to tea. It also masked low quality tea and enticed customers with special spice blends.

The British thought the addition of spices were an abomination to the tea they spent decades developing. They tried to squash stalls that strayed away from standard practice, believing that the use of spices meant less tea leaves were necessary. Obviously, that didn't work since masala chai still exists today thanks to the rebellious chaiwallas that stuck to it.

Which Spices are in Chai?

Masala Chai ingredients are really simple, but it's the spices that vary between each recipe. Almost every family has their own blend which is made according to taste. You can try a ton of different ready made masala chai blends with the tea and spices already measured out, chai spice blends, or chai tea bags and they will all taste wildly different.

A lot of this is due to regional variety and even classism when it comes to spices. For example, cardamom is one of the most expensive spices in the world trailing behind saffron and vanilla. Some families keep masala chai as simple as black pepper.

The base of all desi masala chais usually include the following spices: cardamom, black pepper, cinnamon, cloves, and ginger. Other variations may include nutmeg, mace, fennel, rose, mint, lemongrass, tulsi, ajwain, saffron or star anise.

Some other recipes include allspice due to the notes of cinnamon, cloves, and nutmeg. Allspice isn't a blend of spices, but actually a berry. Either way, I'd stray away from using allspice if you're looking for an authentic Indian recipe.

Use whole spices. Please. Whether you put the spices directly in the chai or grind them into powdered chai masala, using fresh spices in small batches results in the best chai! They will be strained out at a later point.

☕ How to Make Masala Chai

Or as we say "kitna cheeni? (how much sugar?) ek spoon ya do? (one spoon or two?)". Serve with Parle-G biscuits or cake rusk.

The way chai was served in the 1900s was also rooted in classism. British tea drinkers used porcelain, upper class Indians used stainless steel, common folks used clay cups called kulhad, and others drank from saucers. Today, people in India still use kulhads or small glass cups, leaving space at the top for holding on to so their their fingers aren't burned. 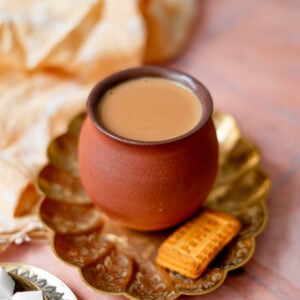 There's nothing as good as the perfect cup of Masala Chai whether it's in the middle of summer or for cozying up in the winter. Black tea is simmered with warming and fragrant spices and is best served with Parle-G biscuits or cake rusk for dipping.
5 from 25 votes
Print Rate
Course: Drinks
Cuisine: Indian
Cook Time: 10 minutes
Total Time: 10 minutes
Servings: 2 people
Calories: 100kcal
Author: Shweta