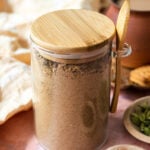 This small batch homemade chai spice is the perfect blend of green cardamom, black peppercorn, ginger, cinnamon, cloves, mace, nutmeg, and star anise. Add it to black tea for a fragrant cup of masala chai or to your fall baked goods.

As someone who makes masala chai just about twice everyday, having a good chai masala (tea spices) on hand is incredibly important to me! This homemade, small batch chai spice blend is my favorite thing in my kitchen for a quick cup.

If you love chai flavored desserts or breakfast items, chai spice is great to have on hand! It's definitely handy to keep in the the kitchen cabinet, especially when fall rolls around and the cravings set in on rainy or cold days. You can add a small scoop to drinks, overnight oats, or baked items for a little sweet and spicy kick!

This recipe is measured in grams, so it does require a kitchen scale. The strength and quality of spices are incredibly different depending on where you source them and this may require some adjustments to get a chai masala blend you love. Chai spice is completely customizable to your preference! The closest you can get to mine is by weight, instead of volume.

If you're using pre-ground spices, I recommend following the recipe by weight as well although it may require adjustments. I recommend this Epicurious article for the closest conversion from ground to pre-ground.

All the spices are readily available at any grocery store, but seriously consider treating yourself to some high quality whole spices for the best results! I source most of mine from Diaspora Co.

The main spices for tea offer the best balance of fragrance, warmth, and spice.

Other spices that are a great addition are mace, star anise, and tulsi but some people don't care for the flavor it imparts. Dried rose petals would also be a great addition but it's better to add them as necessary.

A lot of chai spice blends have allspice. This isn't something we use in Indian cuisine.

How to Grind the Spices

You'll need a Spice Grinder or a coffee bean grinder for finely ground spice. If you don't have one, you can also use a food processor or even a blender. The last option is grinding the spices one by one with a mortar and pestle, which may result in coarsely ground spices.

Another note is that my spice grinder would not grind a whole piece of nutmeg. I ended up using a microplane to shave it into smaller pieces into my spice grinder so it combined with the other spices.

Just about every desi home has their own perfect blend of spices for masala chai. It's never the same across households. Even in my own household, I'm not the biggest fan of my dads chai because it's heavy on the ginger. I prefer my mom's by far!

Ultimately, the blend comes down to you. Do you like more cinnamon? Add another cinnamon stick!! Don't like cloves? You don't have to add it. It's up to your own preference.

Personally, I really love cardamom and black pepper and want it to stand out. I also found that the ratios I've used is perfect for fall baking! The hints of cardamom and cinnamon really stand out in the best way.

I made Chai Masala labels for you for easy labeling!! Download them and print them on Avery Round Labels (22856).

It's hard to know if you love the spice blend until you've tried it. I highly recommend giving it a try by making a cup of masala chai. If you aren't a fan, you can always re-blend by adding more of the spices that you think will balance it out.

For example, my spice blend was initially too bitter and warm, so I knew it had too much clove. I added more cardamom and cinnamon to offset it.

How to make Masala Chai with Chai Spice

I love using chai masala for masala chai instead of whole spices because it's so quick and extends the spices. I frequently feel like I'm wasting precious cardamom pods on a single cup of chai or that one clove is too strong for me.

Other uses for Chai Masala

Chai spice doesn't have to be for a cup of masala chai! It's also super popular for fall baking. It can be added to cookies, used in cinnamon rolls, mixed in with buttercream, etc. It's a delicious addition to just about anything for a warmth, flavor, and fragrance.

It can also be used for savory cooking as well. It is, after all, a spice blend.

Chai masala spice blend will last in an airtight container for up to two years.

More Recipes with Chai to try 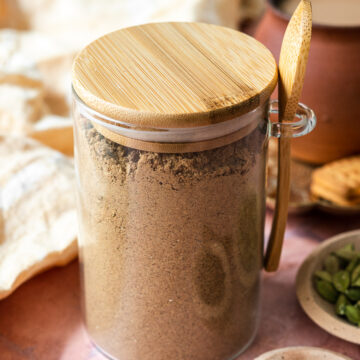