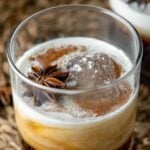 Sip on this dangerously addicting Chai White Russian cocktail, made with vodka, homemade Chai Liqueur, and cream! Serve it with ice in an old fashioned glass for a holiday look!

Making this vodka cocktail recipe is one of the easiest things to add to your bartending skills and only requires three ingredients - chai liqueur, vodka, and cream!

That too, it gives you a buy one get one free type of deal because it'll also add Black Russians to your arsenal if you omit the cream. Everything is simply poured in the glass over ice and mixed together and it's ready to go.

This cocktail is SO addicting - so much so that I drank a whole bottle in one night by myself. You can barely notice the alcohol in this creamy drink which makes it perfect for sipping on throughout the night. The caffeine helps keep a good night going!

If you're here because you love Masala Chai, let me assure you you're in the right place.

What is a Chai White Russian?

The name "White Russian" refers to one of the cocktail's main ingredient, vodka, and the color from mixing the cocktail with milk or cream. It's a variation of the Black Russian, which is dark because it only uses coffee liqueur, like Kahlúa, and vodka.

Does your mind go to Moscow mules here? That makes sense if it does! Russia was the #1 exporter of vodka, so the cocktails took on Russian-inspired names in the U.S.

Instead of using a sweet coffee liqueur, a Chai White Russian uses homemade Chai Liqueur which is a sweetened chai spiced black tea with rum. The Chai Liqueur takes under 30 minutes to make and bottle, and before you know it you'll have Chai White Russians in hand! Using cream or milk as part of the ingredients is very reminiscent of masala chai.

You end up with a creamy alcoholic iced chai! Who wouldn't love that?!

Tips for this Recipe

The main ingredient to a White Russian is the cream! There are a few options here with what to use: 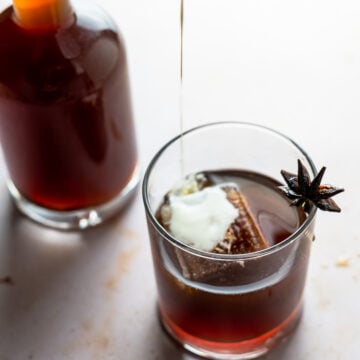