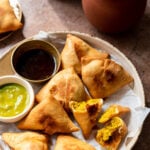 Impress your guests with a platter of freshly-made restaurant quality Paneer Aloo Samosas! The buttery samosa dough is kneaded and shaped by hand, filled with shredded Indian cheese - paneer - which soaks up a ton of flavor with the spiced potatoes, and then deep-fried to crispy perfection. This vegetarian Indian appetizer is a classic snack served with chutneys at restaurants or gatherings.

I don't even have to spend time here convincing you why samosas are good, right? You've probably already had the traditional potato (aloo) with peas filled samosa!

When it comes to samosas there are two types of people: the first type of person doesn't enjoy samosas... they just quietly eat the filling because it's a crime to say you don't like them. The second type of person will eat at least three - mostly by accident - because they're so good. Whichever one you are, you're bound to love this Paneer Aloo Samosa recipe, which was passed down to me by my mother.

These Paneer Aloo Samosas have a buttery crispy flaky crust that's deep fried and filled with a well-balanced, flavorful paneer and potato filling which soaks in all of the spices. They are perfect for special occasions - because there's truly nothing more impressive than sharing freshly-made, homemade samosas at a dinner party.

This post has detailed instructions and photos so that if you're a first-timer you'll have absolutely no issue making them successfully. I promise it'll feel like you have desi auntie on the other side of the computer holding your hand through the entire process. By the end, you'll be surprised at how quickly you're able to fold, fill, and fry the samosas.

What is a Samosa?

If you've ever had the pleasure of going to a South Asian wedding, Indian restaurant, or really any event with your desi friends, you've most likely tried a samosa.

A samosa is a deep-fried South Asian snack and appetizer that's traditionally filled with spiced potatoes and peas. Other variations include pumpkin or meat fillings like chicken keema (spiced ground chicken).

It's typically folded into a triangular cone which is then deep-fried, giving it a crispy flaky outer shell with a savory filling. It's served with a cilantro-mint chutney and tamarind chutney when starting a meal along with other snacks and chaats.

Another delicious way to eat samosas is to smash them and eat them in sandwiches with cheese and chutney, or as Samosa Chaat with chutneys, dahi (yogurt), and sev (crispy chickpea noodles).

The Ingredients to make Samosas

Making samosas was really intimidating to me - until it wasn't. Now it feels like something I can easily crank out with a trip to Whole Foods for some paneer and potatoes and maybe a refresh on ghee.

You may also need a trip to the Indian grocery store for a few specialty blends and spices. Once you have the spices, they'll last you quite a while.

To get an entire cohesive list on Indian spices and groceries, check out my newsletter freebie which preps you with ingredients to make just about every Indian dish ever.

I use pre-ground spices for all of this except for the cumin seeds. Feel free to toast your whole spices and freshly grind them. I've denoted the spices which may require a trip to the Indian grocer with an asterisk* and included substitutions if you can't find them.

How to make Samosas

Part 1: How to make the Paneer Aloo Filling

There are two main steps to making the filling. The first step is to prep the paneer and potatoes and the second step is to cook them with the spices to form a filling.

To prep the paneer, you want to start with about a 4 oz block of paneer. I used paneer that was mixed with turmeric but plain paneer will soak up a ton of flavor. You can purchase paneer from Indian grocery markets or even large grocers like Whole Foods. You can also make your own with only milk and lemon juice using this homemade paneer recipe.

In a small bowl, shred the paneer on the small to medium-sized holes of a grater so that the paneer is finely grated into a consistency that is similar to mashed potatoes. Set the paneer aside.

Boil the potatoes in salty water for about 10 minutes. I used 8 small potatoes to decrease the boiling time. Check the tenderness of the potatoes by seeing if it pierces easily with a fork. The skin may start cracking as well - which indicates the potatoes are ready. Dump out the hot water and rinse the potatoes in cold water. Peel and remove the skin. Mash the potatoes using a fork or potato masher.

Begin heating a pan on low to medium heat. Add about a tablespoon of neutral oil into the pan and add the cumin seeds. Roast them for about a minute or until you see them start to pop and dance in the oil.

Transfer the mashed potatoes and cook them until they start to brown a little. At this point, add the rest of the spices and the shredded paneer. You can also add in peas or other veggies here. Mix it really well until everything is fully combined and the spices are evenly distributed.

Most of the water content should have evaporated by now, leaving a uniform texture. Remove the pan from heat, add in some chopped cilantro, and allow the mixture to fully cool so the potatoes release all of its steam. Be careful not to overcook the potato filling so that it isn't bone dry.

The filling is now done and we can get started on shaping and filling the samosas.

Part 2: How to make the dough, shape the samosa, and fill it

There are six total steps for making, filling, and sealing the samosa.

Repeat steps 3-6 with each piece of dough to form 16 samosas!

If you have leftover dough, you should definitely check out these dessert Pumpkin Pie Samosas!

Part 3: Deep Frying Samosas - The Trick to the Crispiest Samosas

Deep fried samosas are the BEST. Please deep fry them! Baking them or air frying is simply not the same.

My mother uses woks or kadhais to deep fry all of her Indian snacks and desserts. I use a dutch oven. Use whatever vessel makes sense for you, but make sure you use a neutral oil like vegetable or canola oil to fry the samosas.

If the oil is too hot, the samosas will expand and burst. You'll need to remove it, drain the oil from the samosa, and bake the samosas instead to prevent the filling from soaking up all the oil. If it's not hot enough, the samosa won't begin frying and soak up a ton of oil. You'll have greasy and soggy samosas.

How to Serve Paneer Aloo Samosas

Samosas are addicting at pretty much any temperature. They're delicious when they're freshly fried while they're piping hot or served warm. You can even pull them out of the fridge for a little guilty pleasure midnight snack.  I personally recommend letting them cool just a little bit and serving them with this Cilantro-Mint Chutney recipe and imli (tamarind) chutney with a sprinkle of chopped cilantro.

These perfect little hand-held vegetarian appetizers are typically served at weddings, events, and restaurants as a starter snack. It's usually served along with other snacks like chaats as well as a hot cup of chai. You can try it with this Peanut Chaat and a Mango Lassi.

If we have samosas that have been sitting around for a few days and are starting to get a little bit dry, we will smash them and add a little bit of dahi (yogurt), tamarind chutney, cilantro mint chutney, sev, pomegranate seeds, cilantro, and chaat masala to make Samosa Chaat.

Oh my goodness, there is nothing like having a desi mom yell at you while learning to make samosas. I've got all the tips and tricks for you that I've learned over time:

Can samosas be prepped in advance?

Samosas can be prepped in advance. There are two stages at which you can have them prepped - 1. Assemble the samosas but fry them later or 2. Fry them, refrigerate, and reheat in oven.

My preference is to assemble the samosas and freeze them until they're ready to fry. See the below instructions on freezing samosas for reference. If pre-fried, store them in an airtight container in the refrigerator for up to a week. When ready to consume, bake them in the oven for 10 minutes at 250°F. They will not be as crispy as freshly fried samosas.

How do I make vegan samosas?

Instead of using ghee in the dough, use vegetable oil. Instead of paneer, use peas or omit entirely and use double the potatoes and spices.

Can I bake or air fry samosas?

To bake samosas, brush oil all over the samosas. Heat the oven to 425°F and bake for 20-30 minutes, depending on the size of the samosas. They should be golden brown and crispy.

To air fry samosas, brush the samosas with oil. Put them in the air fryer at 350°F for 18-20 minutes until golden brown.

Can I freeze samosas and fry them later?

Yes, absolutely. Freeze the samosas in a single layer on a sheet tray first for at least two hours. Then move them into an airtight container and store for up to two months. Do not store them in a freezer bag. This makes them susceptible to cracking. If they're cracked, they cannot be fried. If you have cracked samosas, you can bake or air fry them. Once you're ready to consume them, fry them straight away in hot oil. No need to defrost. If you do leave them out, set them on a paper towel so that it can absorb the moisture.

What are some additional vegetables I can add to these samosas?

You can add bell peppers, jalapeños, serrano peppers, peas, spinach, carrots, onions, or some curry leaves to these samosas!

Can I use whole wheat flour?

Okay, you've made it to the end. Your samosas are going to look so *chef's kiss*. I cannot wait to see them! 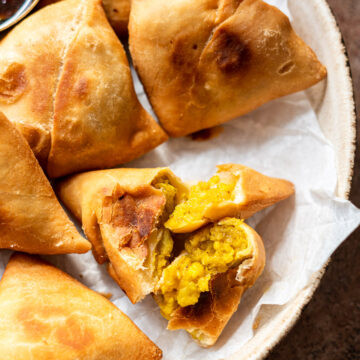