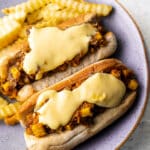 Cheese on cheese? YES. Paneer cheese is tossed in a spicy vegetable mixture, served on a hero and topped with a cheese sauce! This Paneer Masala Cheesesteak-style roll is the perfect, spicy vegetarian option.

This recipe is born out of pure jealousy. As a Hindu, I don't eat steak and therefore have never had a proper cheesesteak. Of course, I've tried chicken cheesesteaks and even vegetarian cheesesteaks while in Philly and they were a bit bland... I can't imagine they're nearly as good as a regular 'ol cheesesteak!

This is my fusion rendition of the famous cheesesteak using paneer! The paneer filling is spicy and savory, and balanced out by a rich cheese sauce and sweet caramelized onions. I'll definitely be cooking this up for the next family barbecue.

Paneer is an Indian cheese typically formed into a firm block. It's a soft cheese with a pleasant texture and a mild taste. It's an excellent source of protein for those that follow vegetarian diets. The best part about paneer is that it sops up curry super well which makes it the ultimate cheese for Indian cooking.

Paneer is frequently described as "Indian cottage cheese." Same same, but different? Cottage cheese is drained and salted. The curds are loosey goosey with a strong tinge of whey. I can't imagine ever putting cottage cheese in curry. Paneer is unsalted and pressed until all the whey is removed. It is a very mild cheese which is why it's the ideal cheese to mix with spices and curry.

Where to find Paneer

I once had a brand ask me not to use paneer for a recipe I was working on with them because they thought it was an inaccessible ingredient. I really think they were just ignorant to how widely available paneer is... Here are a few options on where to source paneer:

If you love paneer, try these Paneer Aloo Samosas!

There's four moving parts to paneer cheesesteaks that makes it a bit involved:

To serve - All four parts need to be ready to go at the same-ish time to eat while warm. Make the caramelized onions first, and while that is going prep the ingredients for the paneer filling and begin sautéing everything together. Cover the filling and onions and set it aside.

While the cheese is going, I also like to begin deep frying french fries in oil or baking them in oven. Then I hit them with a sprinkle of salt. You can also make masala fries or sprinkle a bit of chaat masala, but I think the paneer filling already has enough going on so I keep the fries as plain as possible.

I actually meal prepped these cheesesteaks for the week since I cook for one!

To build the cheesesteak, toast the buns on both sides in butter either in a countertop microwave oven or in a frying pan. Pop the paneer filling and caramelized onions in the microwave for 1 minute, and the cheese sauce for two minutes until it thins and is melty. Stir the cheese until it's nice and saucy. Then you can start layering the ingredients on to the bun!

Looking for more flavorful Indian recipes to try out for dinner? I gotchu! 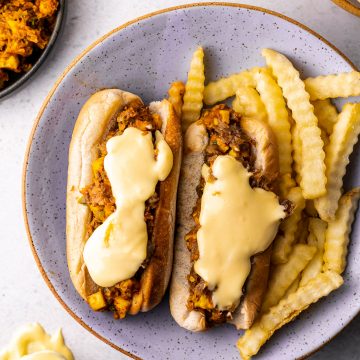