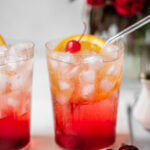 Shirley Temple, named after the famous American actress Shirley Temple, are sweet, bubbly mocktails that are just as entrancing for kids as it is for an adult! It's made of ginger ale and a splash of grenadine which gives it that glamorous vibrant pinkish-red color. Garnish it with maraschino cherries to the heart's desire.

I never outgrew my love for a virgin Shirley Temple as an adult. I'm 100% that sheepish friend at the dinner table that will still ask the server for a mocktail while everyone else sips on cocktails.

My dad always stole my Shirley Temple as a kid * rolls eyes *. I distinctly remembered the first time he tried it, his face shocked that he liked it. He would never order it for himself, though.

I pretended I hated it, but secretly I loved watching him demolish a drink that we both loved. Especially if the restaurant did free refills?? We downed at least 3 minimum.

What is a Shirley Temple?

It's known for it's glamorous pinkish-red hue which comes from the grenadine syrup! A Shirley Temple is made with bubbly ginger ale, grenadine, and sweet maraschino cherries for garnish. Modern recipes substitute the ginger ale with lemon-lime soda.

Funny enough, Shirley Temple herself thought the drink was too sweet and hated being served it all over the world. She described it as a "saccharine sweet, icky drink" (Source).

The actress credits the Brown Derby Restaurant in Hollywood for creating it in the 1930s. She was also protective of her name being used and legally obstructed a soda version of the mocktail from being manufactured twice!

Did you know that grenadine is actually not a cherry-flavored syrup?

Grenadine syrup is made from 100% pomegranate juice and sugar. It's used as a colorful, sweet mixer for several beverages such as a tequila sunrise, rainbow cocktails, etc. The flavor is a mix of sweet and tart cherries and pomegranates, which is why it's frequently paired with maraschino cherries.

You can make grenadine at home or find it in grocery store in the liquor aisle, with Rose's Grenadine being one of the most popular bottle versions.

Homemade grenadine is simply a 1-to-1 ratio (I prefer 2-to-1) of pomegranate juice to sugar that's similar to a simple syrup and free of preservatives, food coloring, artificial flavoring, and high-fructose corn syrup. It's cheaper to make using 100% pomegranate juice than purchasing grenadine, and especially great when pomegranates are in season.

Avoid using more than 2 tablespoons of grenadine, otherwise it'll be too sweet and syrupy.

The two main ingredients of a Shirley Temple is ginger ale and grenadine.

Ginger ale is more traditional to this mocktail, but people began using other light lemon-lime sodas like Sprite and 7Up to add a bit of a citrus.

Grenadine is a popular mixer for non-alcoholic beverages, especially for kids, due to it's vibrant deep red-purple hues. It's easy to make a batch of it at home with pomegranate juice. Some restaurants also use a bit of extra juice from the jar of maraschino cherries instead of grenadine.

How to make a Shirley Temple

Shirley Temples are easy to have ready in a pinch!

Fill a tall glass with ice cubes, then fill it ¾ of the way with a soda like Sprite or ginger ale. Add at least 2 tablespoons of grenadine and serve it with maraschino cherries.

I like to carefully set the maraschino cherries on top of the ice or use a cocktail pick. I was always that person at the restaurant fishing in my cup for the cherries that fell under the ice.

I especially love it with a fresh slice of orange. Add in a straw and give it a good stir before drinking.

People always say a Shirley Temple drink is for kids. But if you've followed along with Masala and Chai, you know I'll give you an alcoholic version of most drinks!

Other virgin variations include citrus, such as lemon, lime, or orange juice. This is why it became popular to add lemon lime soda, like Sprite, instead of Ginger Ale. 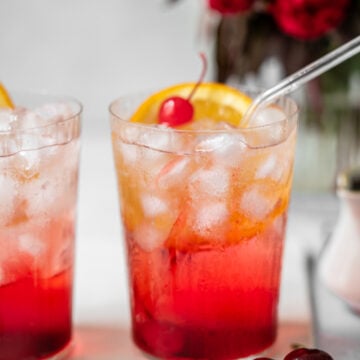 Shirley Temple's, named after the famous American actress Shirley Temple, are sweet, bubbly mocktails that are just as entrancing for a child as it is for an adult! It's made of ginger ale and a splash of grenadine which gives it that glamorous vibrant pinkish-red color. Garnish it with maraschino cherries to the heart's desire.
5 from 2 votes
Print Pin Rate
Course: Drinks
Cuisine: American
Prep Time: 5 minutes
Total Time: 5 minutes
Servings: 2 temples
Calories: 190kcal
Author: Shweta Garg