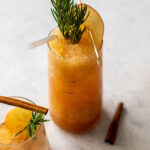 Best part about fall? Visiting local farms for apple picking, fresh apple cider, and apple cider donuts! Take home the cozy memories with this Spiced Apple Cider Slushie that you can make in your own kitchen with only a blender! Also, find instructions for a boozy apple cider slushie!

On the East Coast, nothing marks fall quite like a visit to the local apple orchards for fresh farm treats.

Having grown up in Arizona, I NEVER went apple picking. I had no idea it was a thing until my freshman year of college at NYU where our dorm shuttled a bunch of us to a local farm.

Yeah, the wagon-ride, corn maze, and cute livestock were great. BUT THE APPLE CIDER DONUTS? THE ICE CREAM? I was forever changed. I became a little apple cider fiend over the years - always on a mission to find the best apple cider donuts and hot apple cider to pair!

No fall season feels complete without a trip to the apple orchards in NJ or upstate NY.

It wasn't until 2020 when I headed up to Thousand Islands on a scuba diving trip to Burrville Cider Mill that I realized how glorious churned apple cider slushie with a fresh and hot apple cider donut was. It just hits different in the crisp weather with a cozy sweater. I knew I had to make this at home.

This apple cider slushie has that wonderful apple cider flavor that's amplified with cozy spices - nutmeg, cinnamon, ginger, and cloves. It's also a great way to store extra apple cider before it expires to make slushies whenever you want.

Making an apple cider slushie requires just a few ingredients that are incredibly easy to get!

For garnish, I love a rosemary sprig for a touch of green and freshly cut slices of apples to munch on.

2 Methods: How to make a Slushie

Instead of a slushie machine, you can also use an ice cream machine which will keep it nice and cold for longer until you're ready to serve it and they're much more affordable.

Prep your ice cream machine according to factory instructions, i.e. some require freezing the tub first. Then, add the apple cider (no need to freeze it in ice cube trays), lemon juice, and spices into the tub.

Turn on the ice cream machine and run it for 8-12 minutes, being sure to watch closely for texture. The liquid should freeze completely but still move smoothly so it's a slushie consistency.

The blender is just as easy but requires 3-5 extra hours to allow the apple cider to freeze completely. This will require some planning ahead.

First, you'll need several ice cube trays to hold all of the apple cider. If you don't have enough, you can also freeze the cider in batches and transfer the frozen cubes to a freezer bag while starting on the next batch.

Important Note: Reserve some of the apple cider! The ice cubes will make it tough on the blender to keep running because it'll be so thick. A little bit of liquid will help the blender keep moving. You can also add ice cold water, but that'll dilute the apple cider.

Fill the trays with apple cider and freeze them for around 4 hours until completely solid. Once they're frozen, transfer them to a high speed blender with an additional cup of ice, lemon juice, and the spices. The additional cup of plain ice cubes is necessary due to the strength of the spices.

Run the blender for 4-5 minutes, adding ice cold water or more liquid apple cider as necessary if the blender is unable to continue processing the ice cubes. It's done with all the ice cubes have broken down and you have a thick slushie consistency.

Serve the slushies as soon as possible by spooning the slushie into cups. Garnish with a spring of rosemary and some honeycrisp apple slices.

Oooh, yes! If you follow my drink recipes, you know I'll give you an alcoholic version of it too! Spiked apple cider slushie is honestly too good to pass up.

To make a boozy apple cider bourbon slushie, add 3oz of bourbon and 1oz of ginger beer to the blender with the apple cider ice cubes, spices, and lemon juice. Omit the ginger powder.

To make an apple cider fireball slushie, add 4oz of fireball cinnamon whisky to the blender and omit the cinnamon but add the rest of the spices and ingredients. 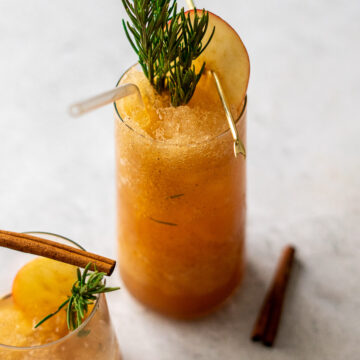