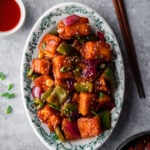 Introducing the world of delicious Indo-Chinese cuisine with this crispy, fried Chili Paneer that's tossed in a hot, tangy sauce. This dish fuses Indian ingredients with Chinese sauces and is typically made in a wok. It's a popular appetizer or can be served with noodles for a full meal.

One of the most underrated cuisines, in my opinion, is Indo-Chinese food. In the United States, it's not well known outside of the Indian diaspora, though it can be found at many restaurants. The range of dishes are super flavorful and a nice break from traditional Indian cuisine.

In my family, we absolutely love going out to restaurants for Indo-Chinese! I've even had delicious Chow Mein at a museum in India and the best Gobi Manchurian street-side at a bazaar.

Chili Paneer is a popular vegetarian dish made with fried battered paneer that's tossed with crispy capsicums and onions in a hot, tangy Chinese-inspired sauce. I love making it extra saucy to serve with rice or noodles, but it makes a delicious appetizer as well.

This recipe makes a semi-dry gravy, meaning the Chili Paneer is saucy and not too dry, but not too gravy-like.

What is Indo-Chinese Cuisine?

Indo-Chinese cuisine is the fusion of Indian and Chinese food, flavors, and techniques. It's distinguishable by Indian vegetables and spices mixed with Chinese sauces and oils. Generally, dishes are stir-fried in a wok.

While Indian and Chinese food mixed through the Silk Road, the dishes we see today mostly trace back to early Chinese immigrants in Calcutta during British-ruled colonial India. In the late 1700s, many immigrants fled China due to civil war and famine and settled in Calcutta.

Chinese restauranteurs began adapting traditional cuisine to encompass Indian ingredients and spices for a few reasons, mainly based on availability of ingredients and a need to cater to larger audiences to increase sales. Now, Kolkata's Chinatown, in a neighborhood known as Tiretti Bazaar, is one of the best places to enjoy traditional Indo-Chinese food.

Indo-Chinese cuisine can be found across Indian restaurants around the world. It's also incredibly popular at dhabas and roadside vendors in India. Some of the most popular dishes are hakka noodles, hot and sour soup, chow mein, chili chicken / paneer, gobi manchurian, chicken lollipop, and many more incredible dishes.

Chili Paneer has three main segments for pulling the dish together - frying the battered paneer, the Chinese-inspired sauce, and the vegetables.

For the crispy fried paneer, we'll coat it with all-purpose flour and corn starch mixed with minimal spices. Of note is the kashmiri chili powder, which can be substituted with regular chili powder for a bit of a kick. The paneer is then shallow fried, so any neutral oil will work.

You can make paneer at home with just milk and lemon juice, or purchase it from most grocers, like Whole Foods.

For the sauce, we're using equal amounts of soy sauce, ketchup, sriracha, and rice wine vinegar. A bit of honey is used for sweetness to offset the spicy, salty, and tangy flavors. We'll also need corn starch and some water to thicken up the sauce.

Personally, I substitute the ketchup with gochujang, a red chili paste used in Korean cooking. I highly recommend it if you're a ketchup hater like me. Instead of sriracha, you can use any red chili sauce. In fact, I love this Gochujang Sriracha sauce.

You can also use MSG if you'd like to, as most restaurants do.

For stir frying, we'll want a green chili, green bell pepper, and red onion. We also use the classic ginger garlic paste, which is a one to one ratio of pureed ginger and garlic.

To garnish, grab some fresh scallions and sesame seeds.

How to make Chili Paneer

To prep the Chili Paneer, start by cubing the block of paneer into equal-sized squares or rectangles. Next, you'll also want to chop the green bell pepper and onion into squares that are about the same size of the paneer. Slice the green chili into small pieces.

In a mixing bowl, whisk together the all-purpose flour, corn starch, kashmiri chili powder, salt, and pepper. Add just enough water to make a loose batter. Toss the paneer with the batter until they're well coated.

Heat neutral oil in a pan for shallow frying. Once hot, add the paneer, allowing for plenty of space between each piece. Fry for 2-3 minutes on each side or until the batter forms a golden crispy crust.

Drain the excess oil on a paper towel lined plate and set the paneer aside.

Note: The paneer can also be deep fried or grilled.

In a small bowl, mix the soy sauce, ketchup, sriracha, rice wine vinegar, and honey together and set aside. Additionally, mix the corn starch with cold water until smooth and set that aside as well.

Pour about a tablespoon of oil (preferably sesame oil) into a wok or cast iron pan on medium to high heat. Once it's hot, add the ginger garlic paste, green chili, green bell pepper, and red onion. Sauté until the onion just turns translucent, but not so much that the vegetables soften. This would also be a great point to add ¼ - ½ teaspoon of MSG if you'd like to.

Lower the heat to a medium flame. At this point, add in the sauce and give the vegetables a mix. Cook for 1-2 minutes, then add the corn starch slurry to thicken the sauce. Once it's thickened to the desired consistency, toss in the fried paneer and mix until well coated. Cook until the paneer is warmed through again.

Remove the Chili paneer from heat.

Garnish the Chili Paneer with sesame seeds and scallions.

Chili Paneer can be served as a hot appetizer before a meal, or alongside several other Indo-Chinese dishes.

It can also be served with noodles, rice, or rolled in a paratha. For a full meal with noodles, I recommend having more of loose sauce to toss in the noodles. 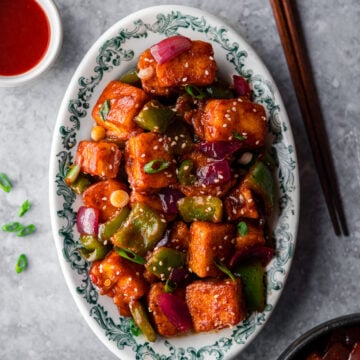