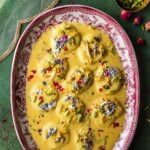 Celebrate special occasions with this royal Ras Malai, or rossomalai, an Indian dessert made with soft and sweet paneer dumplings that are soaked in a fragrant saffron-flavored cream. Top them with pistachios and almonds, and serve them for special guests or at your Diwali party!

Admittedly, Ras Malai is one of my favorite Indian desserts. It's one of the more popular ones along with gulab jamun and jalebi. You can find it at a majority of Indian restaurants. But there's nothing quite like making it fresh at home, as sometimes restaurants pre-made Ras Malai.

This homemade kesari Ras Malai results in pillowy soft balls of chenna that soak up a luxurious malai made with saffron, cardamom, and rosewater. They're juicy, sweet, and fragrant. They're a MUST for any dinner party, special occasion, and definitely deserve an appearance during Diwali celebrations!

What is Ras Malai?

Ras Malai is a popular mithai in India that's made with fresh milk curds, or chenna. It is kneaded into a dough and then shaped into little balls or discs. The chenna balls are boiled in simple syrup before they're transferred and soaked in malai that's flavored with saffron, cardamom, chopped nuts. "Ras" means juice, and "malai" means cream in Hindi, referring to how juicy the chenna balls are after boiling in sugar syrup and soaking in malai.

The dessert is said to have originated in the eastern region of the Indian subcontinent in the 1900s, although the exact origin has been impossible to verify. The main two claims to the creation of Ras Malai are by K.C. Das Grandsons in the Bengal region of India and Matri Bhandar in Bangladesh.

Making the chenna balls is the exact same process as making paneer.

Use whole milk, and whole milk only. Other milks such as 2% on non-fat probably won't have enough milk fat to make a lot of paneer. Buffalo milk and goat milk can also be used to make paneer.

To curdle the milk, use lemon juice or vinegar. If you're using vinegar, be sure to rinse out the chenna so the taste of vinegar isn't in the ras malai.

Corn flour helps with kneading the chenna into a dough. Substitute with corn starch.

The simple syrup is not a classic 1-to-1 ratio of sugar to water. This has more water so that the chenna balls soak up the liquid and expand while being lightly sweetened.

Malai is the "cream" part of Ras Malai. It's essentially sweetened whole milk simmered with kesar (saffron), almonds, pistachios, cardamom, and any other mix-ins like rosewater. It's almost like rabdi without the process of collecting the layers of cream.

For the cardamom, it's ideal to use lightly crushed whole pods to flavor the milk and then remove them later. However, the powder works as well. It just won't be as strong and fragrant with the saffron being the main spice to flavor the cream.

There's a few ways to make the malai. Simmering whole milk until it reduces by half is the most popular. Some also use heavy cream and sweetened condensed milk to make it especially luscious and thick.

How to Make Ras Malai

There's 3 main components to making Ras Malai. First is making the malai so that it has time to reduce over heat. Then, making the chenna, kneading it into a dough, and shaping it into balls. The last step is to boil the chenna balls in a sugar syrup before transferring them to the malai to soak for a few hours.

Let's start with making the malai. Malai means "cream". It's similar to rabdi, where the cream is skimmed off the top of milk as it simmers.

Start by bringing whole milk to a boil in a pot while stirring in intervals to make sure the milk doesn't burn. Add the slivered almonds and pistachios, the saffron, sugar, and cardamom. Bring the milk down to a simmer and let it continue on low to medium heat for 15-20 minutes, or until it's reduced by half.

Remove the pot from heat and stir in the rosewater. Set the malai aside.

This method results in a deeply turmeric-colored malai from the saffron. If you'd like a white malai, add the saffron at the end and it'll still have a light taste of saffron.

Now it's time to make the paneer, or chenna! Chenna and paneer are not the same. Paneer is a cheese that's made out of chenna, or milk curds. The process is entirely the same as making paneer. However, the chenna isn't pressed into a cheese.

I start boiling the milk for the chenna at the same time as I'm making the malai.

Pour the milk into a heavy bottom pot that holds at least 4 quarts of liquid. Using a food thermometer, bring the temperature up to a boil (ideally around ~203°F) on medium heat, stirring occasionally to prevent the milk from burning.

Once the milk just reaches a boil, turn off the heat and disperse the lemon juice all over. Use a slotted spoon to give the milk a good stir. Let the milk sit for ten minutes without touching it. After 10 minutes, there will be signs that the curds have started separating from the whey when you see a yellow liquid. Use the slotted spoon to stir again to separate the curds. Add ice into the pot to prevent the curds from cooking any further.

Prep the draining station by placing a large mesh strainer over a large bowl. Place a cheese cloth over the strainer. Slowly pour the milk curds and whey over the cheese cloth. Use a spoon to press the whey out. If you used vinegar, this is when you would rinse it out using warm water.

Tightly wrap the milk curds in the cheese cloth. Begin twisting and pressing the cheese to get as much whey out as possible. Some people even hang the ball of cheese in the cheese cloth off of their kitchen sink faucet for half an hour to allow gravity to bring the whey to the bottom.

At this point the chenna should be moist but not dry. A very small amount of whey left in the milk curds is ideal for soft ras malai. Transfer the chenna into a bowl or wooden board and add about a teaspoon of corn flour.

Knead the chenna until the milk curds are smooth. A good way to do this is by smearing a small portion of the chenna against the surface you're using and then folding it back into the larger portion. Continue doing this until it's completely smooth and is almost like a dough.

Roll the chenna out into a log and cut it into 12 pieces that weigh around 20 grams each. Flatten the chenna pieces in the palm of your hands to create the chenna discs that are a bit ~ rustic ~ and oval-ish. Alternatively, roll them into a ball and use a smooth surface to flatten them to get a perfect circle.

Note: The weight of the chenna pieces depends on how much of the milk curds separates from the whey. I had around 240 grams of chenna. Do your best to get 12 equal sized pieces of whatever weight. If you like them thicker or larger, make each piece around 30-35 grams each.

Yet another option is to leave the chenna as balls for boiling in the sugar syrup. This helps get an even cook on them. Then, flatten them with the back of a spoon while squeezing out the excess syrup. The drawback is that they easily crack after they are boiled.

Bring water to a boil in a wide pan. Add in the sugar and stir until it has dissolved. Carefully transfer the chenna balls into the syrup. Ideally, none of them should touch, nor should they touch the bottom of the pan. Boil them for 10-15 minutes, or until they double in size.

Once they've doubled in size, carefully remove them one by one using a slotted spoon. Press each chenna ball with the back of a spoon to remove excess syrup and transfer them to the malai.

Cover the baking dish with plastic wrap and chill it in the refrigerator for a minimum of 3-4 hours. The chenna balls will soak in the malai all the way to it's center.

Ras Malai is a great option for a large party!! Serve the Ras Malai chilled in a platter for a dessert option. Top it with strands of saffron, pistachios, and dried rose petals. To make it extra fancy, add edible silver foil as well!

The ideal serving size is two chenna balls with a few tablespoons full of the malai to accompany it.

Tips for the Softest Chenna Dumplings

Achieving soft chenna is arguably the most important part of getting the best ras malai. There are a few key moments that can take your chenna discs from soft and scrumptious to hard and dense.

The chenna is best when it's made fresh at home. It can be kept in the fridge for up to 2 days, and then boiled in the syrup. Another hack is to purchase pre-made rasgulla, squeeze as much of the syrup out as possible, and then soak it in homemade malai.

Ras Malai is perfect for making a day ahead! The longer the chenna balls soak in the malai, the softer and more flavorful they are. 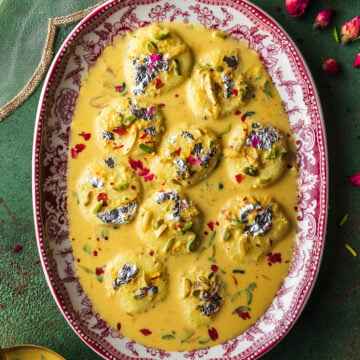