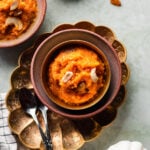 This creamy Pumpkin Halwa, or kaddu ka halwa, is the perfect fall dessert for celebrating Indian festivals. Fresh pumpkin is simmered down into a pudding-like consistency and topped with toasted cashews and golden raisins. It's incredibly rich in flavor and suitable to enjoy for breakfast or a light evening dessert.

Pumpkin season collides with Hindu festival season, where we celebrate Navratri, Karwa Chauth, Diwali, Bhaiya Dooj, and so many more! For me, it means all my favorite desserts are in circulation, and especially all my favorite pumpkin-flavored things.

A dessert that I especially love is halwa, in all the forms it comes in, during celebrations. It's one of the desserts that my mom makes best! In Indian cuisine, halwa is loaded with butter and sugar. The more ghee, the richer it is. If you've got a sweet tooth like I do, then the soft, pudding-like yet flaky texture of halwa is so appealing and comforting.

This Pumpkin Halwa is not actually a traditional dessert, but it's certainly a popular one during the fall. It's great for using up leftover fresh pumpkin for a light, sweet treat that's easy to make and can serve a whole family.

You can also make kasi halwa, or white pumpkin halwa / ash gourd halwa, using the same method and ingredients. Simply omit the milk and add a few strands of saffron.

Halwa, or halva, is a dessert that takes on various forms in several cultures. It is derived from the Arabic word for "sweet", halwa, with the transliterated root letters being h-l-w. It's said to have come to India during the Delhi Sultanate from Persia.

When I think of halwa in Indian cuisine, I instantly think of Suji ka Halwa. It's a semolina-based dessert, where the semolina is toasted in ghee and simmered with a sugar syrup until it's a pudding-like consistency.

Halwa is also prepared without grains! It can be replaced with other fruits and vegetables - like potatoes, yams, gourds, squashes, and everything in between. The fruits or vegetables are typically grated, then cooked in ghee with a sweetener. It's simmered until it thickens, which is when additional mix-ins are added for more flavor and texture.

One of the most popular varieties of halwa is Gajar ka Halwa, which is made out of carrots.

The main ingredient for this fall dessert is fresh pumpkin! The rest of the ingredients are easy-to-find pantry staples.

How to Grate a Pumpkin

Admittedly, the hardest part of making pumpkin halwa is just grating the pumpkin. Here are some tips and tricks along the way.

Pumpkins can be purchased whole, or some grocers sell it cut into fourths. I recommend buying the one that's pre-cut, because that's all you'll need. You'll still probably have some leftover after purchasing it pre-cut.

If you've purchased a whole pumpkin, start by cutting it in half to the side of the stem. Remove the pulp and the seeds from the middle. Save the seeds! Wash them off, dry them, and they make a great salad topper or snack.

Then, cut the pumpkin into quarters. Use a vegetable peeler to remove the peel. If the peel is too tough, use a paring knife to carefully remove the peel in small sections. Wrap the leftover pumpkin tightly in plastic wrap and refrigerate it for up to 7 days.

How to make Pumpkin Halwa

The blueprint for making halwa is very similar across different types. It typically starts off with cooking the base - whether it's carrots, pumpkin, semolina, etc - in ghee. Once softened, a sweetener and milk are mixed in. The halwa is simmered until it reaches a thick pudding-like consistency. Lastly, it's topped off with additional mix-ins, such as nuts or spices.

This pumpkin halwa is really no different from the blueprint.

Pumpkin Halwa can be served either warm or chilled. Halwa is typically enjoyed for breakfast or along with lunch. Garnish the halwa with chopped nuts, such as pistachios, cashews, or almonds.

In terms of serving size, my mom always says to eat no more than the size of your fist. It is, after all, quite a bit of sugar and ghee.

Serve halwa while warm with a scoop of ice cream for an especially delicious dessert.

Store Pumpkin Halwa in an airtight container in the fridge for up to 5 days. To reheat, sauté it in a pan on low to medium heat for 5 minutes, or simply warm it up in the microwave for 30-45 seconds. Add a teaspoon of melted ghee to refresh it. 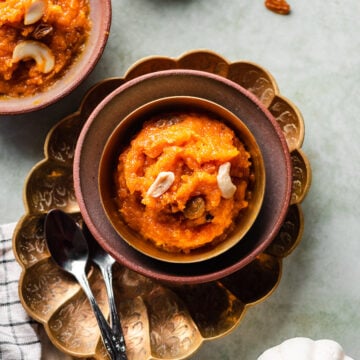