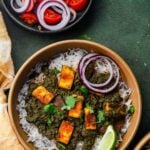 A fan favorite, this Saag Paneer is made with a unique ingredient - Swiss Chard! Enjoy this Indian dish made with lightly-spiced, creamy leafy greens and fried paneer. It's best when served with basmati rice or roti.

One day, I walked into my parent's home in Phoenix to see a disturbing amount of swiss chard freshly washed and laid out on the long kitchen granite island. The gorgeous deep green and ruby red of the chard were absolutely striking.

My mom explained that a friend had removed all the chard from their garden and given it to her, so I was immediately curious to see what she would do with so. much. chard. I should have taken a picture to share with all of you because it was more than I've ever seen at a grocery store.

She did five main things with all that chard -

Admittedly, I don't think I've ever really had chard before but man is it absolutely freaking delicious with Indian flavors! With a bit of fried paneer and the makings of a great saag, this is the only way I'll be eating it from now on.

For me, the major key was using about a teaspoon of cumin seeds and a very few other Indian spices. The pairing is unmatched and brings out so much flavor along with a bit of tomato paste and lemon juice for acidity, then some cream to balance it all out.

If you aren't a fan of leafy greens like me, I promise this dish will convert you. Serve the creamy Saag Paneer with rice or roti and you have a wholesome, healthy, well-rounded meal before you.

What is Saag Paneer?

Saag Paneer is a creamy leafy greens-based dish with lightly fried paneer and spices originating from the Indian subcontinent. Saag refers to the greens used, which can be mustard greens, spinach, chard, or pretty much any other leafy green. Paneer is an Indian cheese made with milk curds which are pressed into a firm block.

This popular dish is easy to make vegan, making it accessible for different diets since it's also already gluten-free. It's enjoyed for lunch or dinner, typically with rice or roti.

The difference between Palak Paneer and authentic Saag Paneer is simply a matter of which leafy greens are used; "saag" refers to any leafy green such mustard greens or even spinach, whereas "palak" directly translates to spinach in Hindi.

Every household has a different way of making Saag Paneer, and especially varies throughout India. In comparison to mine, some won't use tomatoes and / or less spices.

For a little added spice, you can blend a few serrano peppers with the swiss chard.

How to make Saag Paneer

To start off, the paneer needs a bit of preparation.

You can optionally make your own paneer at home! Refer to this recipe for homemade paneer. I sincerely prefer it homemade as opposed to store-bought for Saag Paneer because the texture is much more appealing and it'll soak in a lot more flavor.

All you need to make paneer at home is lemon juice or vinegar, whole milk, and a cheese cloth! It's super accessible, but as I mentioned above Saag Paneer with halloumi or tofu work just as well.

Whether you use fresh or store-bought paneer, you'll want to cut the paneer into thin-ish rectangles, not so thin that they dry out but they shouldn't be a thick cube. Use a fork to poke holes in the paneer (this is the way my mom taught me to avoid bland paneer).

Then, lightly fry the paneer in ghee in a hot pan until it's lightly browned on each side. Sprinkle the paneer with a bit of salt while warm. Set aside until the saag is prepared.

While the paneer is frying, start preparing the swiss chard. Remove the thick stalks by starting with your hand at the bottom of the chard where the stalk ends and the leaves start. Clamp your hand around the stalk and pull upwards so that you remove the leaves from the stalk. Discard the stalk.

For swiss chard, you'll want to steam the leaves in a steamer for five minutes before blending them. If you're using a bright leafy green like spinach, you can blanch it to retain it's bright green color.

Transfer the leaves to a blender and add water as necessary to get the blender running. It's okay if you add too much water, this can be cooked off later. Puree the chard and any other greens until completely smooth.

Now, getting started on the gravy base is as easy as any other Indian dish. Start with cumin seeds, ginger garlic paste, and finely chopped yellow onion in ghee, emphasis on finely chopped.

Once the onion has browned, you'll add in the spices and tomato paste with a bit of water. The water is to prevent the spices from burning and to thin out the tomato paste to form a bit of a gravy. Simmer the gravy until the ghee pools out and separates on the sides.

Once the gravy is ready, you can directly pour the blended greens into the dutch oven. If it's too thick, thin it out with a bit of water but remember that we'll add cream in later. Add salt and pepper to taste.

Now bring the saag up to a boil and drop the fried paneer into the dutch oven. Give everything a good stir and then cover the pot for a few minutes. Let the saag simmer for up to five minutes.

Remove the saag from heat and slowly stir in the heavy cream to prevent it from curdling. If you'd like it creamier, you can add more cream or whole milk. Finish it off with a squeeze of lemon juice for freshness and acidity.

Finish off the Saag Paneer with a bit of heavy cream, chopped cilantro, raw red onion rings, and a lemon or lime wedge for serving to guests.

Serve hot Saag Paneer for friends and family during lunch or dinner! It pairs best with rice or roti and with a sabzi, such as Aloo Methi or Dahi Wali Arbi. A refreshing salad like raw red onions with a squeeze of lemon juice and fresh tomatoes also cuts through all the greens.

Make it vegan. Vegan Saag Paneer is so easy to make! Substitute the ghee with a neutral oil or vegan butter. Use firm tofu instead of paneer. Instead of heavy cream, coconut milk or cashew cream works super well. This will change the taste a bit but is still just as delicious.

Use halloumi instead of paneer. Can't find paneer or don't have the time to make it at home? Fry up a bit of halloumi instead. It's just a bit saltier and chewier than paneer.

Use any type of leafy greens. Yes, just about any of them will work! Obviously not greens like arugula or lettuce. But spinach, mustard greens, radish greens will all work!

Make Saag Paneer ahead. The swiss chard can be steamed, blended, and frozen for up to 3 months. Just defrost it and make the tomato onion gravy base to add it to. The saag can last in the fridge for up to five days, just lightly fry the paneer and add it in when you're ready to serve.

Add cream to the heart's desire. I only add about 2 tablespoons of heavy cream, but you're welcome to use more. The saag is a bit more fibrous and has texture this way, so adding more cream will make it smoother. 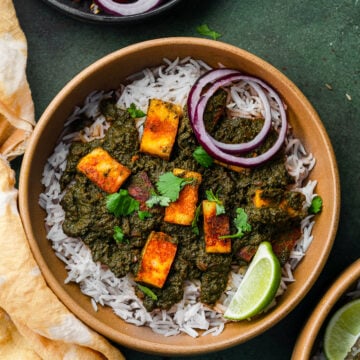 Vegan Saag Paneer. Use neutral oil or vegan butter instead of ghee. Substitute firm tofu instead of paneer. Instead of heavy cream, coconut milk or cashew cream works super well. This will change the taste a bit but is still just as delicious.