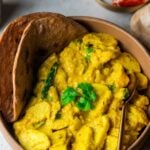 This homestyle Dahi Wali Arbi is a sabzi with pan-fried taro root in a tangy dahi-based gravy. It's mild, yet hearty and comforting. Have it ready in under 30 minutes and serve it with stuffed paratha in a spread of Indian dishes for a delicious family dinner.

This sabzi is made with taro roots that are boiled, then lightly fried in ghee. It's then cooked in a tangy dahi-based gravy. Turmeric gives it an appealing vibrant yellow color that'll most likely leave your hands stained with turmeric for a night, ha!

Dahi Wali Arbi translates to "the taro with dahi", due to there being a few other Indian dishes with taro root vegetable in it. It's something you'll never ever catch at an Indian restaurant. But, I also love obscure homestyle dishes which only an Indian mom or auntie can make for you!

Some women even eat it to break their fast on Karva Chauth, a festival where Hindu women practice a days fast for their husband's safety and longevity.

Taro root, also known as arbi in Hindi, is a starchy and mild vegetable. When boiled, it's nutty and sweet and makes for great bubble tea!

On the other hand, Arbi ki Sabji with dahi is a savory mild dish. It relies on a few ingredients to bring out the flavors, namely ajwain (carom seeds) and dahi (curd yogurt). The resulting flavor is earthy and tangy, which is not a flavor profile that's familiar to most palates. When it's done well, it's extremely comforting and filling when served with paratha.

This recipe has been well-tested and it's tried and true over several years! The ratios of ingredients and techniques bring out the best flavor and texture for this otherwise simple dish.

Sabzi, or sabji, is a term in Hindi that simply refers to a dish made of vegetables. It includes a variety of vegetarian Indian dishes where vegetables are cooked in spices or in a thick gravy. A small amount of sabzi is typically served with dal or another sabzi along with roti or rice.

Sabzi is meant to be a part of a larger meal for added nutrition and fiber. Served by itself, it's not meant to be filling unless it's consumed in large amounts.

As I mentioned, Dahi Wali Arbi is a really mild dish. There are very few ingredients necessary to bring out the flavor of taro to make this a hearty, comforting sabzi.

I've denoted the ingredients which may require a trip to the Indian grocer with an asterisk* and included substitutions if you can't find them.

Starting with the taro roots, boil them in hot water until they're tender when stuck with a fork. This can take up to 15 minutes depending on the size of the taro, or even faster with a pressure cooker. Make sure the fork easily goes all the way through the middle, otherwise the taro root is still raw in the middle.

Once the taro root is tender, you'll see the skin is already loose and lifting from the vegetable. Pour the hot water out and rinse the taro root in cold water to stop the cooking, until it's cool enough to handle. Remove the skin and discard it.

Pro Tip: If it's been boiled long enough, the peel will almost fall off from the vegetable itself with a bit of assistance. No peeler necessary.

Once the taro root has been peeled to reveal the white root vegetable, cut it down the middle lengthwise. Then, cut the taro into semi-circles.

Pro Tip: If it's still raw in the middle, add it back into a bowl with a tiny bit of water at the bottom. Cover the bowl with plastic wrap and pop it into the microwave for a few minutes until cooked through.

Add ghee into a pot on medium heat. Once warm, add the taro. Pan fry the taro in the ghee until it's golden brown.

Pro Tip: Be careful not to over fry, otherwise the taro can become slimy.

Once the taro is golden brown, add in the ajwain, turmeric, sliced serrano pepper, and salt. Give the spices a toss so that they coat the taro, then add the dahi and water.

Give everything a really good stir in the pot. Simmer the sabzi until some of the water evaporates and the taros starches naturally thickens the dahi-based gravy to coat the vegetable. Add more water if it thickens too much, but it should be a thick gravy and not too watery like a soup.

Garnish the arbi with chopped cilantro and it's ready to serve while warm.

What to Serve with Arbi Sabzi

Dahi Arbi Sabzi is best served with an Indian bread like roti, naan, or stuffed paratha. Ideally, it would be served as one part of a whole meal. It's great when paired with another sabzi or dal like Whole Masoor Dal, Saag Paneer, or Dahi Vada. 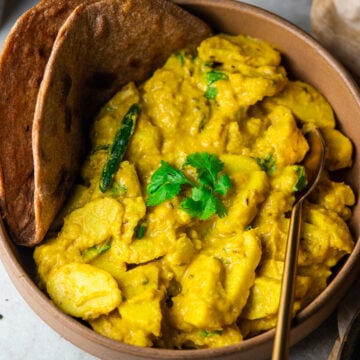 This homestyle Dahi Wali Arbi is a sabzi with pan-fried taro root in a tangy dahi-based gravy. It's mild, yet hearty and comforting. Have it ready in under 30 minutes and serve it with stuffed paratha in a spread of Indian dishes for a delicious dinner.
5 from 2 votes
Print Pin Rate
Course: Main Course
Cuisine: Indian
Prep Time: 10 minutes
Cook Time: 10 minutes
Total Time: 20 minutes
Servings: 4 servings
Calories: 168kcal
Author: Shweta Garg