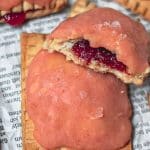 Enjoy this easy nostalgic, semi-homemade Guava Cheese Pop Tarts for breakfast served with a strong cup of coffee! Pre-made pie crust is filled with guava paste, topped with a guava cheese glaze. Best enjoyed next to a pool or the ocean!

Embracing the summertime from my home in New York City instead of somewhere tropical with these guava cheese pop tarts! I spent June 2019 in Cuba and guava was a part of breakfast every. single. day. I miss that vibe.

Indians are OBSESSED with guava. India produces close to half of the guavas worldwide. I was a lil' Maaza guava juice monster when I was young (if you know, you know).

I'm huge on trying to recreate memories at home through food. I think pop tarts have to be everyone's favorite nostalgic breakfast (my favorite were the chocolate fudge!). It was only natural that I gravitated towards combining some of my favorite memories into this homemade pop tarts recipe!

These semi-homemade pop tarts are best for breakfast with freshly brewed coffee, but honestly I snack on them all day long.

This recipe is so effortless and quick! You only need a total of 5 ingredients, most of which you'll already have.

It's family friendly, fun to make with your kids, and a bit nostalgic! It's also the perfect breakfast treat during the summer.

What is Guava Cheese?

I've become obsessed with making some recipes at home in different forms! So far, I've cooked up guava cheese pancakes, buttermilk biscuits, and these poptarts. If you've had guava cheese in another form that I should try, let me know in the comments!

Making pop tarts at home only requires a whopping five ingredients! The only thing that may be a little difficult to come by is the guava paste.

How to make Homemade Pop Tarts

To simplify the process, you can buy pre-made pastry dough or pie crust depending on the texture you're looking for.

Roll out the pie dough and cut into rectangles

Follow the instructions on the box of the pie crust. Most of them have thawing instructions to prevent breakage. Also double check the box to see if it includes 2 sheets, or just 1 because you'll need 2. Unroll the first sheet of pie dough. Use a rolling pin to roll out the dough into a rectangle until it's ⅛ inch thin.

Use a ruler or a straight edge to cut out 6 symmetrical rectangles of the desired size to make 6 pastries. Mine are about 3 x 4.5in. They don't need to be perfect! I think they're kind of ~ cute and rustic ~ when they're imperfect. Place these rectangular-cuts in a baking sheet.

If you have extra pie dough, you can lightly knead the dough back together and roll it out again to make more pop tarts. Or you can save it for another project.

Guava paste usually comes in large blocks. Cut it into six ¼ inch thick slices that are about 2 x 3 in to allow space for sealing the pop tart on all sides. They should be about 30 grams each if you're following my measurements.

Place the pieces of guava paste in the center of the first set of rectangular cut pie dough. You can also add slivers of cream cheese if you'd like to at this point.

Lay the second set of rectangular pie crust dough that you cut out on top of the guava paste. It'll seem smaller than the first set due to the added height from the paste, so you may need to stretch it to line up the sides of the dough.

Use your fingers to seal the edges as much as you can. Use a crimp to seal it on all sides, or a fork to get that classic homemade look.

Bake the pop tarts in the oven at 350°F. Depending on how large you made them, it may take them 20-30 minutes so monitor for when they're golden brown.

How to make the Guava Cheese Glaze

While the pop tarts are baking in the oven, it's time to make the guava glaze AKA the pop tart icing.

Once the pop tarts are baked, allow them to cool for ten minutes and drizzle the glaze on top. The glaze will become less sticky as it cools. Top with sprinkles, flaky sea salt... whatever your heart desires.

Here are some tips I've found super helpful from when I've made these pop tarts!

Can I use guava jam?

Yes! Use guava jam, homemade jam, or guava paste. Any of them will work.

Should I use pre-made pie crust or puff pastry dough?

Either will work and will result in different textures! The pie crust will result in a more solid crust that's similar to actual poptarts. The puff pastry dough will be flaky, fluffy, and thicker.

What kind of cream cheese should I use?

Where can I find guava paste?

Guava paste can be a bit hard to come by in the US if you're not familiar with it. I found mine with Southeast Asian Food Group (IG: @southeastnyc) that's local to NYC, and I believe the Goya brand carries some. I've also seen guava paste at Target and Amazon so be sure to check online.

How do I reheat them?

If you like pop tarts warm, you can reheat them in a toaster oven for 7 minutes.

What if the guava glaze leaks out of the poptart?

That's totally okay! If you're still making the glaze, you can scoop up the leakage and pop it right into your glaze. It's unlikely that it'll burn if it oozes out but if it does then carefully remove it and toss it. 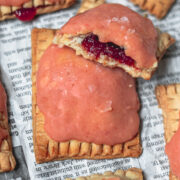 This recipe was updated on 5/24/2021 to include more detailed steps, updated metric measurements, and new photos.