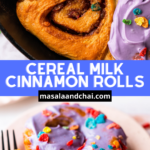 These fluffy brioche Cereal Milk Cinnamon Rolls are flavored with a deliciously sweet Fruity Pebbles cereal milk. Then, they're slathered with a thick and luscious Ube Cream Cheese Frosting and topped off with more Fruity Pebbles! They're best eaten warm with a glass of milk!

The Ube Cream Cheese Frosting is thick and smoooooth, and uses ube extract to color it a deep purple! It's the perfect dessert or even an indulgent breakfast! I especially love it warmed up until it's soft and gooey with a latte in the morning.

The two important ingredients that make these cinnamon rolls stand out are the cereal milk and ube.

Ube (pronounced ooh-beh) is a purple yam from the Philippines with an exterior that is similar to a sweet potato. When you cut inside, it reveals a striking deep purple or a shade of purple. Ube is a staple dessert ingredient in the Philippines.

It tastes like a subtle mix of pistachio and vanilla while being a bit earthy, like a sweet potato. I say that a lot of ube flavored treats using halaya and extract almost taste like the cereal Fruity Pebbles to me. Because the flavor of ube is so subtle by itself, you'll frequently see it paired with ube extract to boost the flavor and color.

That's where the cereal milk comes in! As I mentioned, ube treats taste like Post Fruity Pebbles Cerael to me. The classic Milk Bar cereal milk is made with Corn Flakes. This recipe uses Fruity Pebbles instead to flavor the milk as well as top the cinnamon rolls.

How to make Cereal Milk

You know when there's milk left at the bottom of your bowl of cereal.. and it's sweetened with delicious subtle notes of the cereal? It's the best!

Well - Milk Bar in NYC created a whole product out of this. Their famous Cereal Milk is made with Corn Flakes-flavored milk and more corn flakes as a topping.

At first, I thought you could just soak the cereal in milk for half an hour and you'd be done. You'd have the best cereal milk. But I was entirely wrong. It was too subtle in flavor, especially if you're mixing it into something like cinnamon rolls where you want it to be a dominant flavor.

To make Cereal Milk, spread out your chosen cereal (in this case, Fruity Pebbles) on a parchment paper-lined sheet pan. Roast the cereal at 300°F. The exposure to heat brings out a ton of the flavor, especially once the cereal hits the cold milk. After roasting it for 10-15 minutes, transfer the cereal to a jug or bowl with cold milk. Give it a stir and let it sit for at least 30 minutes.

Strain out the mushy cereal. Use the back of a spoon to squeeze out all the milk that the cereal absorbed. Add a healthy pinch of salt to really bring out all the flavors.

Note that you'll end with less milk than you started with. I would expect to lose at least ¼ - ½ cup to what the cereal absorbs.

After the cereal milk is really, it's time to make and assemble the cinnamon rolls.

Brioche dough is best made in a stand mixer. In my experience, a handheld mixer's motor doesn't have quite enough power to knead the dough. It gets overheated very easily. Brioche dough can be made by hand, but kneading it until smooth is quite the workout.

Fit the stand mixer with the dough hook. Add the flour, instant yeast, salt, and sugar and mix it briefly. Instant yeast can be mixed directly into the dry ingredients. If using active dry yeast, activate it first with lukewarm milk and sugar. It's crucial to ensure the milk is lukewarm so it doesn't kill the yeast. Set aside the mixture until it's frothy.

Then, add the eggs on a low mixing speed. Slowly begin pouring in the lukewarm milk until a shaggy dough forms. Keep mixing it for an additional 3-4 minutes until it starts to form a cohesive dough.

On a medium mixing speed, begin adding the butter in quarter portions. After one portion of butter has fully mixed into the dough, add the next one. This will take around 6-8 minutes. Continue kneading the dough for around 10 minutes. The dough is done when it's silky smooth and begins pulling away from the edges. You'll be able to lift it with the dough hook and none of it sticks to the bowl.

At this point, remove the bowl from the stand mixer. Using your hands or a rubber spatula, fold the dough into itself from all the edges and pinch it together. Then, flip the dough over and you'll have a smooth ball.

Cover the dough with a towel or plastic wrap. Depending the the temperature and humidity, allow around dough to rise for around an hour or until it has doubled in size. Alternatively, proof the dough in the refrigerator overnight.

Make the Filling and Assemble

To make the cinnamon sugar filling, beat together the dark brown sugar, butter, salt, flour, and cinnamon until it's fully combined. Then, gently fold in Fruity Pebbles. Alternatively, add the Fruity Pebbles after spreading the filling on the brioche dough.

After the brioche has doubled in size, scoop it out of the bowl on to a lightly floured surface. Rub the rolling pin with flour as well. Lightly reknead the dough a few times. Then begin rolling it out into a thin rectangle (mine was around 26 inches long). Square off the edges as much as possible or trim the edges so they're straight.

Scoop the brown sugar cinnamon filling on to the rolled out dough. Spread it out all the way to the edges with an offset spatula. Try to get it as even as possible. Add more Fruity Pebbles here, if desired.

To roll the dough, I find it easier to lightly flour my hands. Starting from the long side, begin rolling the dough inwards. Keep the rolls as tight as possible for a neat cinnamon roll. Once it's rolled all the way, pinch the edges together to seal the seam.

Use a bread knife, or a serrated knife, to trim off about ½ inch from the edges of the log. (Optional) Flash freeze the log for 20 minutes to make it easier to cut the rolls. Otherwise, slice the log into half. Continue to work in halves as you slice the log until there are 16 rolls. If you're using one 9" x 13" baking dish, it's better to cut 12 large cinnamon rolls.

Arrange the rolls in a baking dish, cake pan, or cast iron skillet being sure to leave space in between for the second rise. Cover the rolls with a towel and allow it to rise for an hour, or until it's doubled in size and filled out the baking dish.

Preheat the oven to 375°F. After the rolls have risen for about an hour, they should double in size and fill out the pan or baking dish. When poked, it'll leave an indent.

Bake the rolls for 20 minutes, or until they are golden brown. This is a great point to clean as you go! Wipe down any surfaces and wash out the stand mixer bowl. Remove the rolls from the oven and allow them to cool and set for 10-15 minutes. Get started on the cream cheese frosting at this point.

To make the cream cheese frosting, transfer the butter and cream cheese to a stand mixer and beat it together until they're combined. Then, add the powdered sugar. I recommend covering the bowl to prevent a plume of powdered sugar or adding in a small amount at a time.

Lastly, add ube extract. Start at around ½ teaspoon of extract and add ¼ teaspoon at a time according to taste and color preference. Thin out the frosting with 2-3 tablespoons of the leftover cereal milk so that it's a spreadable consistency.

Once the cinnamons have cooled down but are still warm, spread the Ube Cream Cheese Frosting all over. Sprinkle Fruity Pebbles all over the top of the rolls. Enjoy them while they're still warm!

Thanks to the Ube Cream Cheese Frosting and the cereal milk, these cinnamon rolls make a great treat for a Halloween party!

Instead of using the Fruity Pebbles as a topping, use some Halloween sprinkles with eyeballs. They're super cute!

Storage and Make Ahead Instructions

For baked cinnamon rolls, tightly wrap the rolls and store at room temperature for up to 5 days.

Freeze unbaked cinnamon rolls for up to 2 months.

To prepare the night before, refrigerate the unbaked cinnamon rolls overnight. Ensure they're tightly covered. Remove the rolls from the fridge an hour before they're ready to bake, and let them rest at room temperature while still covered. Then bake as instructed.

For baked cinnamon rolls, store them in an airtight container for up to 3 days at room temperature. When ready to serve, bake for 10-15 minutes, just until they warmed again. Make the frosting during this time. Remove the rolls from the oven and glaze them.