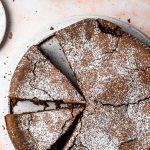 This Nutella Flourless Cake is so soft and scrumptious, you won't even be able to tell it's gluten-free! It only requires 8 ingredients, resulting in a perfect chocolatey no-flour cake.

The sunken cake is so chocolatey and best served warm with a scoop of ice cream! You can also easily take this recipe and make a flourless chocolate cake, subbing the Nutella for the same amount of chocolate.

If you love baking, this cake is low key actually really fun to make! Between making the meringue and folding it in, I find it to be very soothing. Not to mention how satisfying it is when the cake sinks post-bake, much like a soufflé, to make beautiful cracks in the crust.

And let's not forget to mention Nutella! Helloooo. Need I say more? It's a spin on the plain Flourless Chocolate Cake to add that layer of nutty flavor from the hazelnuts. This cake is sooo chocolatey and soft. You wouldn't even believe there's no flour.

The meringue is what gives structure to the cake, without tasting eggy like soufflés.

How to make a Flourless Cake

Making the base of the cake could not get any easier. The ingredients - Nutella, vegetable oil, amaretto, water, salt, egg yolks, and espresso powder - just need a little stir to bring it together and that's about it.

I used my Homemade Nutella to make this, but you can also use regular jarred Nutella. If you use homemade chocolate hazelnut spread, ensure it's in liquid form before adding it to the batter. Using your own homemade Nutella also significantly improves the macros in this recipe to be better for you. However, this recipe is not keto friendly even though it doesn't have flour.

The amaretto is completely optional, but I love adding it into my bakes wherever I can! The sweet, nutty flavor compliments the hazelnut so well. For more recipes with amaretto, check out this Amaretto Cherry Almond Cake and Amaretto Sour.

You'll need a hand or stand mixer to make meringue. Whipping the eggs by hand is exhausting and takes more time than you will want to spend, and an upper body workout no one asked for. Use a clean bowl. Any oil residue can mean the eggs won't whip.

Start with your egg whites in a large bowl. Begin whipping it at a low to medium speed until it becomes frothy. Once frothy, turn the speed up to a medium until it doubles in sizes and reaches soft peaks. At this point, begin adding in a very slow, steady stream of sugar. Don't dump it in all at once because the whipped egg whites won't be able to handle the weight and may deflate.

Continue whipping the egg whites and sugar until you see glossy stiff peaks like above. Don't whip past this.

Folding in the Meringue

Wh-What does that mean... What does fold in the meringue mean?

You just.... Here's what you do. You just fold it in. (Please tell me you understand that Schitt's Creek reference!)

Preserving the fluffy meringue is key to a flourless cake that will rise and then sink, creating the gorgeous cracks as it releases air. It's also what essentially replaces the flour in this recipe - like magic!! To mix the egg whites into the rest of the batter, you'll need to fold it in.

To do this, start by dumping in about a fourth of the meringue in to lighten the batter. This sacrifices some of the air we've created, but it's a necessary sacrifice. Use a rubber spatula to mix in the egg whites.

Fold in the rest of the egg whites about a third at a time. Scoop up some batter beginning from the center of the bowl to the side. Bring it up and the back over to the center, cutting back into the middle of the bowl and beginning your fold again. Continue this movement while turning the bowl as you go.

Tips for making a Flourless Cake

Use a 9-inch springform pan. This cake rises quite a bit before sinking, and it'll need the extra space and easy removal to take it out.

You'll need two to three bowls depending on the technique you use to remove the egg yolks. 1 bowl will be used for mixing, and the others for separating the eggs.

I like to use the classic technique - cracking the egg in half on a flat surface and dropping it back and forth between the halves until I've removed all the egg whites into a bowl and dropping the yolks directly into the batter. This is more difficult and make it more susceptible to losing yolk to the egg whites.

Another way to do this is to crack the eggs as gently as possible into a bowl, and use your hands to scoop out the egg yolk. I've also seen people crack the egg into the palm on the hand and use the cracks between their fingers to let the egg whites fall into the bowl.

Serving the slices of cake can be as simple as a dusting of confectioners' sugar, because the cake stands out so well on it's own!

Some other options I've loved are:

This cake does not need to be stored in the refrigerator. It can actually become a bit damp with fridge storage which effects the texture. I also do not recommend freezing it.

Store the cake on the counter top in an airtight container or wrapped in plastic wrap. Allow a bit of air into it to maintain the texture of the crust. You do not have to worry about the cake becoming stale since there is no flour! 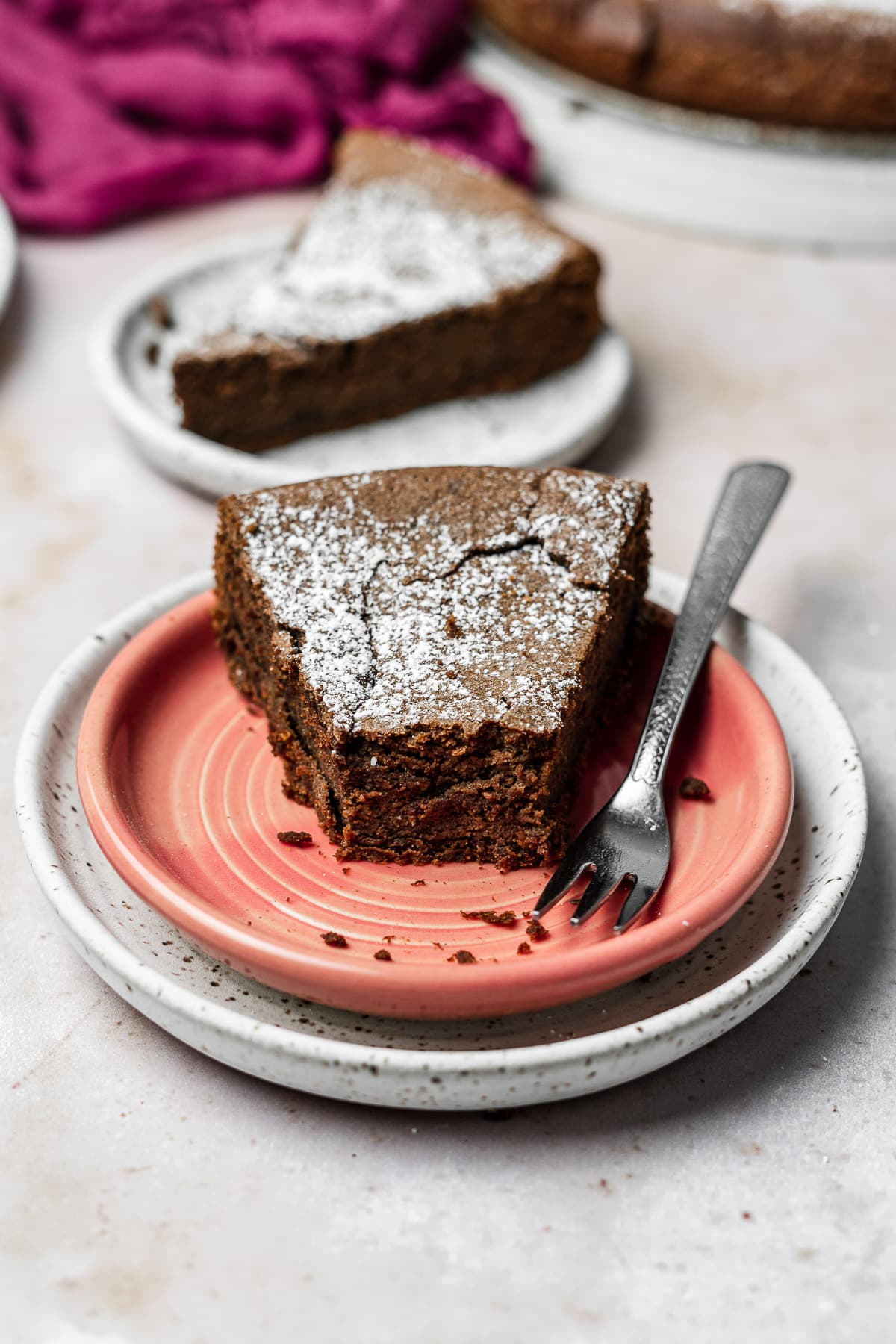 I'd love to know what you thought of this recipe! Leave a comment and rating below! You can also find me on Pinterest and Facebook, or stay in touch with me via my Newsletter!